Today I’m celebrating more summer produce with this Pennsylvania Dutch Creamed Cucumbers recipe. This recipe is for what some might know as old-fashioned creamy cucumbers and onions. Freshly sliced cucumbers dressed in a creamy sour cream sauce, it’s a simple dish you can put together with ease.  And it makes a crisp and refreshing side dish for almost any meal. Try serving it with chicken breasts, burgers, or swiss steak! 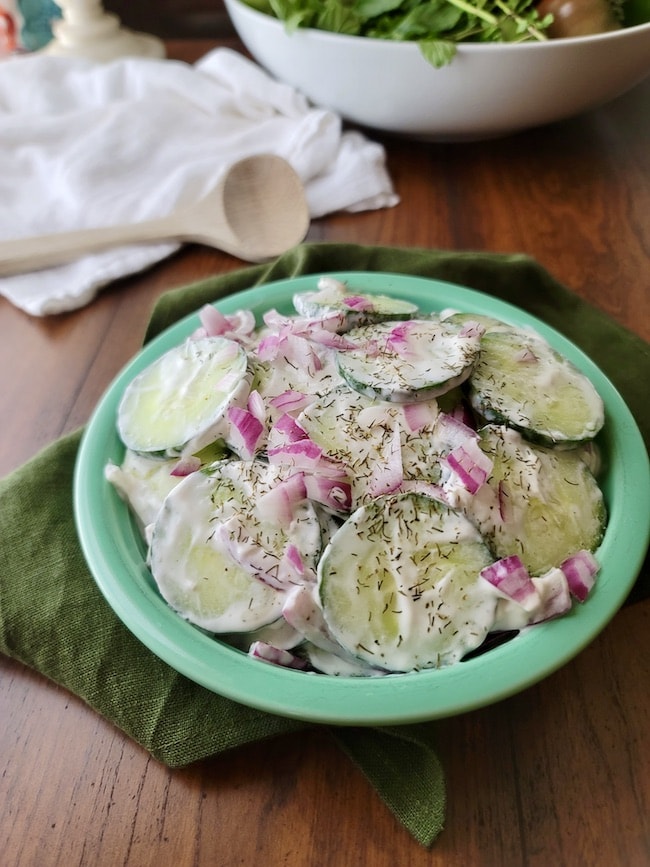 PA Dutch Creamed Cucumbers is a summer staple for us at our house. It’s a traditional Pennsylvania Dutch recipe, but it’s not exclusive to the Pennsylvania Dutch culture, or to Pennsylvania. Sour cream and cucumbers are a perfect match, so it’s not surprising that this is a popular summer side dish all over, and there are lots of ways to make it. And in fact, although I am familiar with it from growing up in PA, my husband grew up in a Polish household and would tell you that this is a Polish dish! Either way, it’s a deliciously simple way to enjoy fresh summer vegetables.

And as in the traditional PA Dutch version, I add a little bit of thinly sliced onion to my recipe. Any onion will work but I like the bite of red onion. You can also add some fresh or dried herbs. I really enjoy a sprinkling of dill weed for a burst of fresh herbaceous flavor. A splash of vinegar and a touch of sugar balance out the flavor and make a rich slightly sweet and tangy sauce. 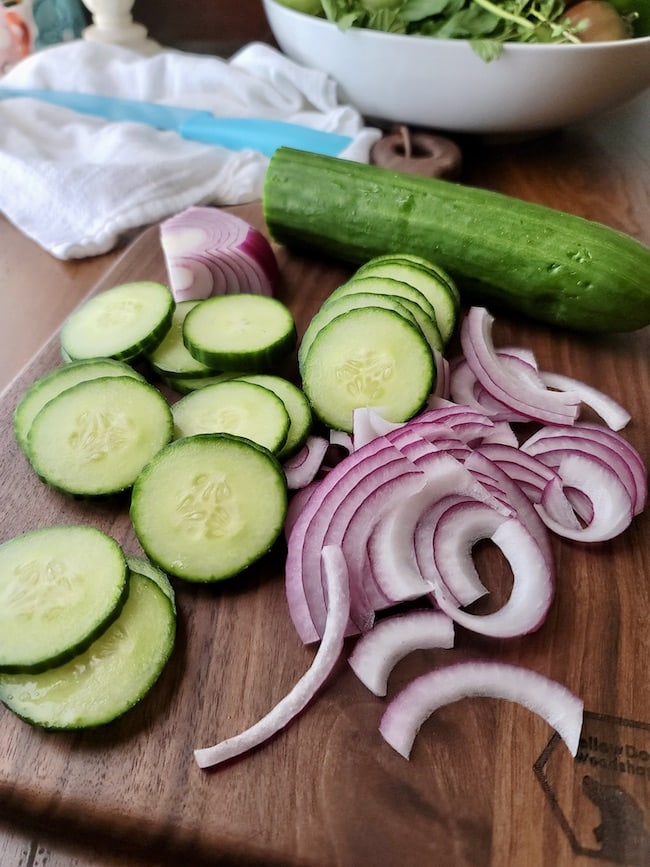 What Ingredients are in Pennsylvania Dutch Creamed Cucumbers?

There are only a few ingredients in PA Dutch Creamy Cucumbers:

Cucumbers – I prefer an English cucumber because of its thin skin and lack of seeds, but any fresh cucumber will work. If you’re using a thick-skinned cucumber, go ahead and peel it before using it in the recipe.  If the seeds are large in your cucumbers, remove them by scraping them out with a spoon.

Onions – Use your favorite onion. I like red or purple onions, but a sweet onion or yellow onion will work, too. If you don’t like onion, go ahead and leave it out.

Vinegar – Apple cider vinegar is my choice for this recipe, but red wine vinegar will work, too. You can also use regular white vinegar but might need to use a little bit of extra sugar to balance out the tangy flavor.

Sugar – Sugar is an optional ingredient, but my family really prefers a flavor with a  bit of sweetness. You can also use your favorite sugar substitute, added to taste.

Dill Weed – Dill is optional but adds a nice, fresh flavor to the dish. 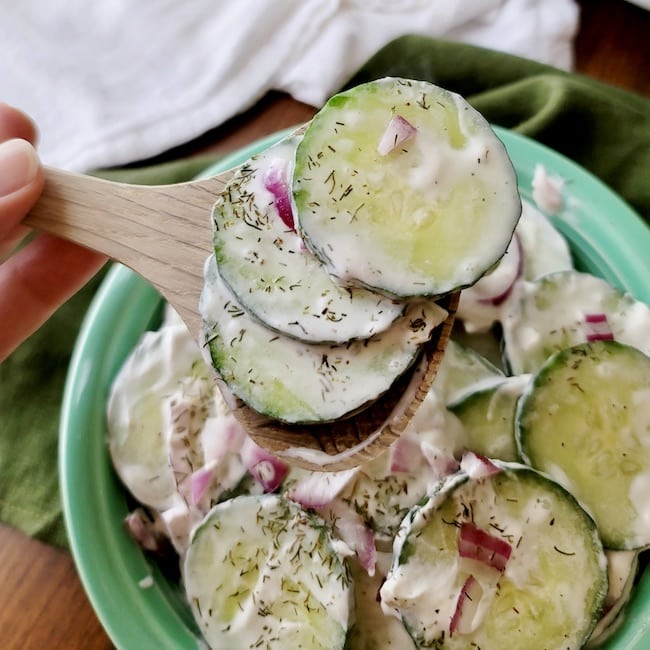 Make it ahead. For the best flavor, prepare this recipe one or two hours before serving and allow it to sit in the fridge until serving time.

Scale the recipe up or down.  Double it, triple it, or cut it in half. Make the right amount to suit your needs.

Slice the onions and cucumbers. Slice the cucumbers to the thickness you prefer but make them all a uniform size. Do the same with the onions. I like my onions sliced thinly, but you can coarsely chop the onions, or even mince them.

Dry the cucumber slices to avoid a watery dressing. For best results, you’ll need to remove some of the liquid from the cucumbers so you don’t end up with a watery dressing. Do this by slicing the cucumbers and tossing them with 2 teaspoons of salt. Allow them to sit for 15-30 minutes or so in the refrigerator, then rinse them in a colander and drain them well. You want them to be dry before using them in the recipe, so pat them dry with a clean, lint-free towel if needed.

Store the leftovers. Store your leftovers in a bowl with a tight-fitting lid and refrigerate for 2-3 days.

I hope you try this recipe for PA Dutch Creamed Cucumbers, and if you do, I hope you enjoy! Let me know in the comments below! 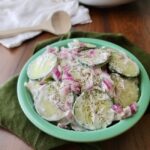 These PA Dutch Creamed Cucumbers are an old-time favorite. Crisp sliced cucumbers, sliced onions, and a creamy dressing make for a light and refreshing side dish. 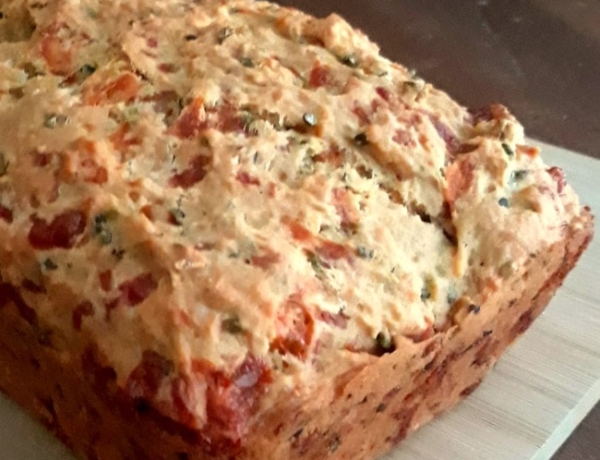 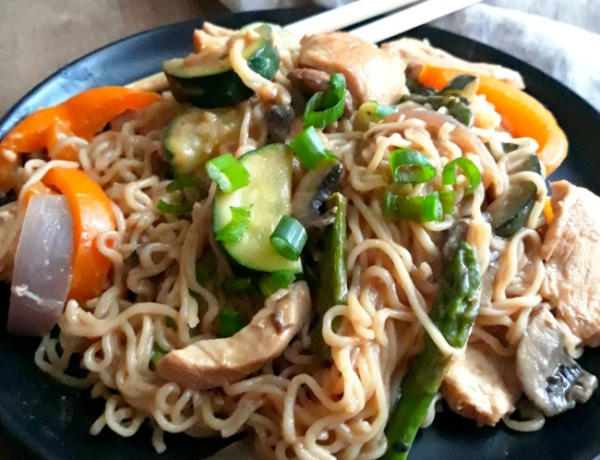 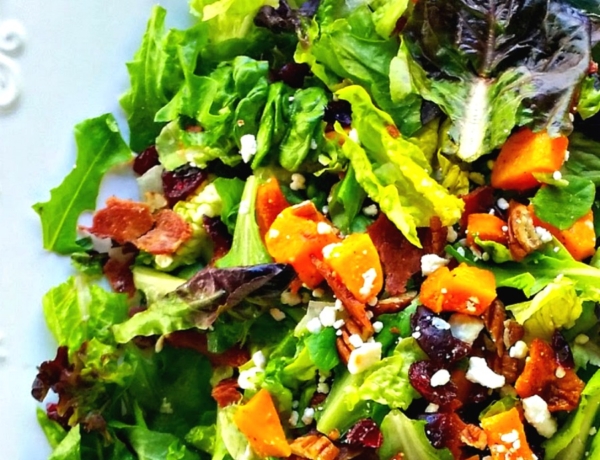